Chipper Jones, playing 70 games in the jersey with the number 10 on his back during the year 1992, decided that he wanted to be the last player to wear this Durham City Bulls Jersey. Although he played in five cities over four years in the minor leagues he stated that Bull City was the place that meant the most to him and he insisted that his time with the Durham Bulls was unforgettable so he wanted to make no one else forget either. With this being said Jones decided to retire the jersey number 10 in front of a huge crowd that came to see him at Durham Bulls Athletic Park on Tuesday, August 20, 2013.

Although Capital Sign Solutions could not be there in this moment with Chipper Jones, the Durham City Bulls, the reporters and the mass amounts of fans at the Athletic Park in Durham, our sign definitely could be. We were pleased to announce the honor of being able to help Jones retire his jersey number by providing our sign expertise to Jones and to the Durham Bulls Athletic Park; with the finish of them they will be ready to hang in the outfield with the rest.

With Jones being just the fourth person to have his jersey retired in the history of the Durham Bulls, 111 years, Capital Sign Solutions was thrilled to provide our signage to Jones on his first time he had been back to Durham since 1992 to unravel the signage at this ceremony. 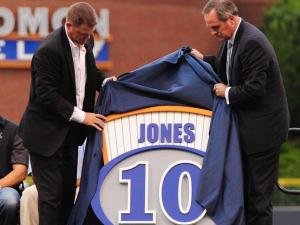 Jones described the uniforms as being “traditional”, which gave him a sense of nostalgia, history and pride as he spoke at his jersey retirement ceremony. Capital Sign Solutions honored this unique tradition in every aspect, helping Jones feel what he described as a sense of history and pride as reporters and fans filled the stadium to see not only Chipper Jones but the unraveling of the sign and his retired jersey. Pleased to be a part of the process for the retirement of Jones’ jersey number, the sign now hangs with the other 3 retirees in the Durham Bulls Athletic Park.

To see more pictures from this event CLICK HERE.